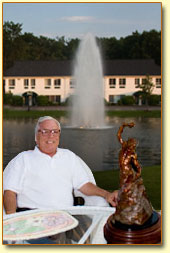 During that time, Brooks had the unique ability to see opportunities and began his transition into real estate by purchasing various properties, which he then rehabilitated and leased out.

Brooks founded Brooks Properties in September 1980. The company grew and now owns more than 40 buildings and currently leases more than 1.5 million square feet of property along Interstate 93 in New Hampshire and Massachusetts.

More than 20 years later, Brooks built Brookstone Park off Route 111 in Derry. He included a golf course designed by a well-known golf architect, a restaurant to complement his love of fine dining, and an event center to host lavish celebrations.

At the entrance to Brookstone Park's Event Center is where a larger-than-life sculpture of the "Self Made Man" stands. Brooks had the piece commissioned for Brookstone Park. It is the perfect visual to describe Brooks' career: a man taking what he has and making the most of it - in this instance, a very successful career.

2011 Self Made in New Hampshire Celebration Gala Memories...

First Annual Self Made in New Hampshire Award Winner:
Dr. Deborah A. Osgood 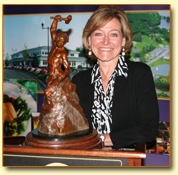 Knowledge Institute, Inc., Exeter
Dr. Deborah A. Osgood worked full time through all of her post-high school education - bachelor's, master's and doctorate degrees. She worked her way up the corporate ladder, pulling one company out of near-bankruptcy and bringing revenues up 500 percent and creating dozens of jobs. She later created her own business, Knowledge Institute, to help small businesses connect with business counselors, academic institutions, trade groups, and government and nonprofit programs. Knowledge Institute has helped more than 2.5 million people get access to the information they need. Deborah serves on Gov. Lynch's Economic Development Advisory Committee and on the U.S. Small Business Administration Regulatory Fairness Board. She has also served as a mentor to businesswomen in Iraq.


Runners-Up:
Maryanna Hatch
RiverWoods Continuing Care Retirement Community, Exeter
Maryanna Hatch dedicated her entire life to better living conditions for the elderly. As a former Durham selectman and Town Council member, she helped build low-income senior housing, as well as began a home-health agency for the elderly. It took her a decade for the senior community she envisioned - RiverWoods Continuing Care Retirement Community - to happen. RiverWoods has now grown into three campuses, housing more than 600 residents. At 88, it's now Maryanna's home.


Kirk C. Simoneau
Nixon, Raiche, Vogelman, Barry, Slawsky & Simoneau, P.A., Manchester
Kirk C. Simoneau was raised by deaf parents, which meant he had to teach himself to speak and talk at a young age. Personal challenges could have slowed him down - such as watching his father get killed by a drunken driver, supporting his wife through cancer twice, and taking on the care of his mother with Alzheimer's. But Kirk prevailed, graduating law school second in his class. He made partner within a year; the law firm now bears his name: Nixon, Raiche, Vogelman, Barry, Slawsky & Simoneau, PA.


Semifinalists:
Fred Bramante
Daddy’s Junky Music, Manchester
Fred Bramante's passions are education and music. As the owner of Daddy's Junky Music, his business has grown to 19 stores. A former teacher, he continues to stay involved, sitting on the state Board of Education.

Bob Lawton
Funspot, Laconia
Bob Lawton may have had more fun at his job than anyone else in NH since 1952 - that's when he started what's now known as Funspot. The largest arcade in the world houses games, a bowling alley, mini golf, rides and more.

Mark Lore
Ride-Away Handicap Equipment Corp., Londonderry
Mark Lore hitchhiked to NH as a college graduate in 1980. Within 10 years, he worked his way up the ranks to being able to buy Ride-Away and become president. It is now the U.S.'s largest provider of modified vehicles.

Steven Smith
Main Street Radio, Newport
Steven Smith doesn't like to hear "no." His passion for working in radio didn't end when he lost his job at one station; he started WCNL - now the highest-rated station in Sullivan County - where he's not only GM and program director, but morning show host.

Self Made in New Hampshire
A Tribute To People Who Have Truly Carved Their Own Place In Our State.